These foresters started with a student organization: now they are fighting wildfires out west 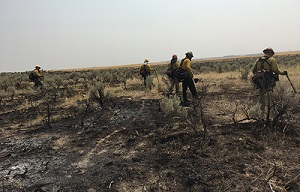 CARBONDALE, Ill. — Forest fires in the western part of the United States have increased rapidly in recent decades, and the wildfire season is lasting longer than ever before.

As of midsummer in 2018, three times as much land in California had been burned compared with the same period the year before. That’s why a team of Southern Illinois University Carbondale forestry alumni have joined the fight to protect homes and land in the west.

When fighting fires, Wade Bloemer said there is only one constant: change. Being flexible and ready to adjust is the only way to suppress the raging fires. For Bloemer, SIU graduate and district forester for the Illinois Department of Natural Resources, this knowledge comes from six years of experience fighting western wildfires.

To assist in the national effort against wildfires, the IDNR sponsors an interagency crew containing type 1 and type 2 firefighters, EMT’s, foresters, resource managers and others. The 2018 crew features multiple SIU alumni who have been deployed to places such as Idaho, Utah and Oregon.

For 2014 forestry graduate Caleb Grantham fighting wildfires is a rigorous and challenging endeavor. But having a team makes all the difference.

“Everyone is very well trained and has taken multiple training courses and received certifications to build their own fire resumes and experience. This is also something to take into consideration and is rewarding to know that everyone on the fire line with you is very well qualified and dependable for their role as a firefighter,” Grantham said.

The teams are usually deployed to an area of high concern for two or three week periods. While there, they split into squads and cover the region they are briefed on. At night, they camp out in tents or on the ground and are usually up around 4:45 a.m. ready to hit the ground again.

The team finishes up when the fire is contained or when their deployment period is over and they hand off to another team. Most teams are deployed once a year, but when the fire risk is higher — as it has been in 2017 and 2018 — more deployments are likely.

Suppressing a wildfire is a careful balance between aggressive action and continually managing safety concerns. From indirect attacks to brushing roads and digging lines just inches from burning vegetation, Bloemer’s trust is in clear safety procedures.

“Firefighter safety is always the most important variable, and that in itself is reassuring and makes me want to continue going on details,” Bloemer said.

To further manage these safety aspects, the teams set up trigger points. For instance, a certain humidity point might be too low for safe work or there may be a line that, if the fire crosses, proves it is too dangerous to proceed in that specific area. These trigger points provide a clear framework for the firefighters to known when to keep fighting and when to get out.

While many on the team have experience doing prescribed burns for land management purposes, those type of fires are quite different than the raging forest fires burning in the west.

“In a wildfire, we didn’t set it, so we don’t have the perimeters and control lines set,” Bloemer said. “In a controlled burn, we have ways to keep the fire in the box where we want it. So basically in a wildfire, we try to set those things after the fact.”

The tactics for fighting these fires is often changing, which is what Benjamin Snyder, Illinois district forester, finds to be most challenging. For him, the key is to focus on your team and your current assignment.

“Every incident is different. Trust your team, and don’t get frustrated about what you cannot control,” Snyder said.

Preparing as a student

Each member of the crew brings their unique expertise with them on deployment, but for those who studied at SIU, their forestry background and unique fire experience sets them up for success.

Under the guidance of professor and faculty advisor Charles Ruffner, many of the Illinois crew members were formerly part of the SIU Fire Dawgs student organization. Within this group the students take courses to qualify them to fight wildfires, are taught to conduct prescribed burns and gain knowledge on proper equipment and procedures.

“The forestry program at SIU was awesome and we were fortunate enough to have the Shawnee at our back door and had great outdoor labs and hands on experience throughout,” Grantham said. “(It) allowed me to learn valuable skills that I use every day in the ecological restoration work I do today throughout the Shawnee National Forest.”

While the work can be taxing and often quite challenging, the greater passion of preserving the land keeps these foresters going.

“I was asked by a supervisor if I would like to join the Illinois Type 2 Initial Attack crew,” Bloemer said. “I did not know what I was getting into but was hooked after my first roll.”