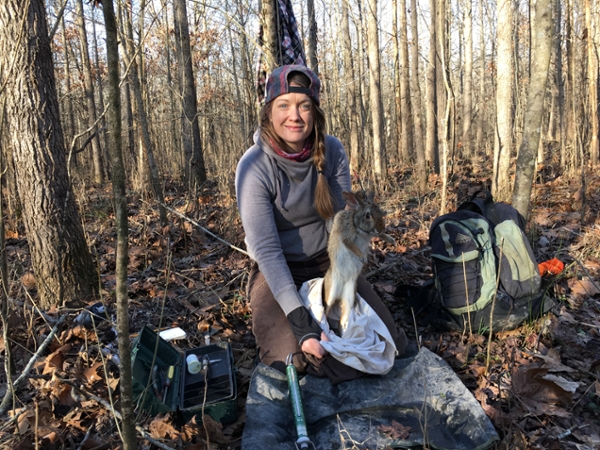 Elizabeth Hillard wants to know more about the health of the Cypress Creek National Wildlife Refuge in southernmost Illinois, so she’s checking with some of the residents -- swamp rabbits.

Hillard, a doctoral student studying forest-wildlife relationships in the Department of Forestry, is part of a study to help guide ecosystem management in the refuge. Her study includes live trapping swamp rabbits and outfitting them with radio collars in a bid to study their population, their range and how they live and die.

Swamp rabbits are a large variety of cottontail rabbit and they have specific habitat needs. They like lowlands near water -- cypress swamps, marshes, floodplains. Unlike most rabbits, they like to swim. They do so to avoid predators, and they swim to travel. They’ve been known to hide underwater with just their noses exposed.

Hillard explained that the swamp rabbit is an “indicator species” of bottomland hardwood ecosystem integrity. In other words, if the rabbits are doing well, with plentiful numbers and evident animal health, then the habitat they need -- the swamps and marshes -- are also likely to be healthy. If the population diminishes, then something in the ecosystem has likely changed.

Previous SIU studies showed that swamp rabbits don’t thrive in mature forests. They prefer brushy, young forest, sometimes on the edge of mature forest, and proximity to wetlands. Researchers on those studies found that swamp rabbits were prospering in areas new to federal conservation programs -- areas that had been farmland and were now reverting to forest.

Public opinion generally favors preservation of old growth and mature forest, particularly on public land. That ecosystem isn’t beneficial for the swamp rabbit -- or for other species who need the same type of habitat it does.

Hillard’s work will contribute to policy-making in Cypress Creek, where wildlife habitat is a priority. Her research links forest stand structure with habitat suitability to help refuge management determine the value of maturing stands of trees in relation to early-stage forest. There is value, Hillard said, in both habitats.

Other animals that share the swamp rabbit’s preferred habitat include a number of amphibians and reptiles as well as non-migratory songbirds and wild turkey.

“I’ve had three field seasons to collect data,” Hillard said. “I’m in the analyzing phase now. The importance of this type of research is that we have to stay on top of habitat management. We’ve altered the landscape, and habitat is fragmented. In Cypress Creek, habitat is a primary concern, so we need to understand how to balance different species’ habitat needs.”

Hillard’s advisers are project investigators John Groninger and Clay Nielsen, both professors in the Department of Forestry.  “Hillard's research puts together some of the final pieces regarding swamp rabbit-habitat relationships in this critical portion of their range,” Nielsen said.