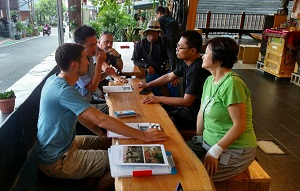 CARBONDALE, Ill. – Evan Greenspan, a graduate student in forestry at Southern Illinois University Carbondale, was determined to find a way into conservation research even though his academic background was in history, not science. His determination paid off.

Greenspan is part of a team conducting popular opinion surveys in Taiwan as an early step in the possible reintroduction of Taiwan’s former major predator, the elusive and increasingly rare clouded leopard. The clouded leopard is a beautiful wild cat, weighing about 50 pounds at full growth and two to three feet long, with a tail to double its length.

According to a recent discovery, there are two species. The one native to Taiwan is the mainland species; the other is the Sunda clouded leopard, which lives exclusively in Sumatra and Borneo. Though the genetic difference is as much as that between a lion and a tiger, the two species bear close physical resemblance to each other. The range of the mainland species native to Taiwan covers the Southeast Asian rainforests and extends to the Himalayans in Nepal.

Greenspan’s work is part of the “human dimension study” that is generally part of major reintroduction or policy changes in environmental conservation movements.

He had been a history teacher in Massachusetts. But that wasn’t his real passion. So, after four years of teaching, Greenspan quit, taking a year to travel from one conservation volunteer job to another, from Peru and Bolivia to Botswana and Thailand. He was “pretty broke” by the time he got to Thailand. So he stayed a while, making money playing saxophone and later, landing another teaching job. Meanwhile, he was writing letters to faculty members at various schools, seeking a way into conservation without the burden of earning a second bachelor’s degree.

And then Anthony Giordano, founder of S.P.E.C.I.E.S. (the Society for the Preservation of Endangered Carnivores and their International Ecology Study) gave him a chance.

“He told me about a project he wanted to develop that might suit my background – a clouded leopard reintroduction study,” Greenspan said. “He suggested I write a scientific proposal. I didn’t really know how to do that, and I was working, so it took me a few months. But I sent it to him. He said it showed commitment – so he’d help me fix the mistakes and go forward with it.”

Greenspan was in Taiwan this past summer with Giordano and Nielsen overseeing the public attitudes survey. The survey, using a set of questions established as effective for this type of study, includes rural populations in the areas near where the clouded leopards would be reintroduced, and urban populations. For the rural survey, Greenspan and the team visited towns and talked with the tribal leaders of indigenous people. The urban survey will be online.

“It was strange – everyone we talked to in Taiwan, every single person – knew what a clouded leopard is even though they are extinct there,” Greenspan said. “But in Thailand, where clouded leopards still live, no one seemed to know what they are.”

The clouded leopard team arrived in the countryside at a time coinciding with festival season in the villages. Greenspan said he was able to witness and experience an array of cultural customs because of this (good) and sample the local drink, millet wine (not so good).

Greenspan left Taiwan with 258 surveys. He’s starting to work through the data now and will continue when the urban population surveys are compiled.

“This survey is in the early stages, so it’s too early to draw conclusions,” Greenspan said. “But it does seem so far that we have more positive feedback than negative, though reintroduction is not without controversy. And even if we have really positive support, reintroduction is still a ways off.”

“Evan's research represents an important step in understanding reintroduction potential for large carnivores globally,” Nielsen said. “This project fits well with my research program that associates human attitudes with ecological attributes of the animals themselves when conserving large carnivores.”

Greenspan is excited to be part of the effort.

“I expect to have all the data collected by December,” he said, noting that his goal is publication of the study.

And then it will be on to the next adventure, or the next step of this one.