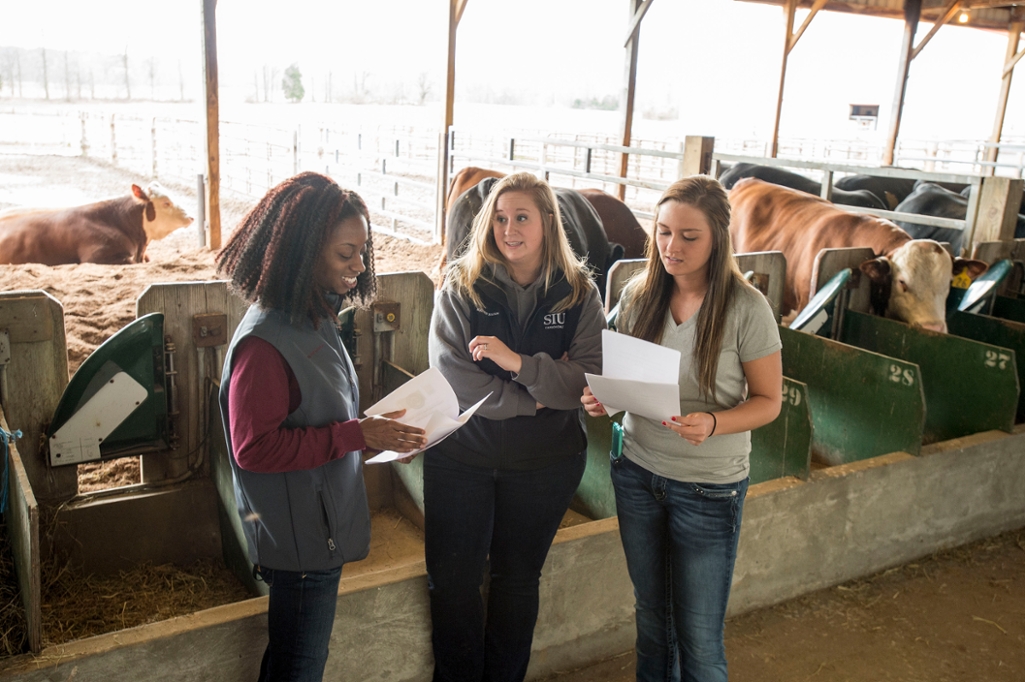 A group of four students with barely any cattle experience among them spent a few months learning how to handle bulls, how to performance test and evaluate them and finally, how to sell them. Here are, from left, Alexis Johnson, from Springfield, Tenn.; Claire Hoffman, from McHenry, Ill., and Megan Tockstein from Odin, Ill. Not shown here is Alissa Hoyt – she was busy with the marketing end of the sale.  (Photo by Russell Bailey)

The sale was March 11 at the SIU Bull Test Station, also known as the Beef Evaluation Center. This year’s sale featured the option of online bidding.

The sale is an annual event, not counting a two-year hiatus, and is a valuable resource for livestock breeders in the area. The inclusion this year of video and online bidding means the best bulls from this sale were available to buyers from a much larger area of the Midwest – or even across the country.

“Video and online bidding is a growing marketing outlet for cattle producers, but it is not something done frequently in the Midwest,” Rebecca Atkinson, associate professor of animal science and coordinator of the sale and the performance evaluations that preceded it, said. “I’m grateful it went over well.”

Alissa Hoyt (Carrolton), an animal science major, specialized in marketing initiatives for this project. She anticipates increased use of video and online bidding during live auctions.

“It’s an easy way for people to see the bulls without leaving home,” she said. “I think online marketing for sales like this will increase in popularity because of increased use of the internet.”

Atkinson worked with a team of student interns to performance test the bulls from November, 2015 until the early February. One of the most important tests is true feed efficiency. A bull that makes the most efficient use of its feed grows better with less feed waste, a trait breeders can reasonably expect will be passed down to the bull’s calves. Other tests include frame scores, pelvic measurements and ultrasound carcass evaluation of fat, an indicator of meat quality.

Atkinson and her team initially accepted 40 bulls into the program. Bulls must be healthy and manageable when they enter the program. In addition, the program accepts only bulls registered with a recognized cattle breed registry. The sale includes 34 bulls and seven heifers, three of which are bred.

“This is a great group of bulls with some high performance scores and a variety of genetics,” Rebecca Atkinson, associate professor of animal science specializing in beef cattle.

Here are the sale averages for each sale category: